We’ve reached the end of the road in our Banknotes of Canada series. If you thought we were done with the Canadian 100 dollar bill, then we have a list of five things you don’t know about the Canadian 1000 Dollar bill. The fact that Canada even had a 1000 bill is something noteworthy for many Canadians.

The First Series: 2 Canadians join a Royal cast on the largest denomination banknote

As you are likely well aware from reading our Canadian bank note series, Canadian currency and banknotes are constantly in flux and not solely through exchange rates. The Bank of Canada’s “First Series” was only issued for two years, 1935-37. But if you were fortunate enough to actually possess one of the largest denominations of banknotes in 1935, you were greeted by one of two non-royal family portraits of famous Canadians.

An allegorical engraving of “security” was the engraving image chosen for the obverse of the “First Series” Canadian 1000 dollar bill.

In 1935, much of North America struggled through the Great Depression, including Prairie farmers, who suffered through “The Dust Bowl” like their American counterparts. The unemployment rate was over 12% nationally and remained above that number until World War II began.

Did you know that if you possessed a Canadian 1000 dollar bill in 1935, you had THE definition of security? According to zippia.com, the average annual salary in 1935 was $471, while high-earners made $1,070 annually.

The Canadian 1000 bill is NOT legal tender, but It still holds value

Did you know that no Canadian 1000 bill in circulation is legal tender? If you didn’t know this, you’re not alone, as an Ontario man found out in 2020.

However, you don’t need to throw the banknote out, frame it as “worthless” currency, or go bank to bank like the Ontario man did. The Bank of Canada readily accepts out-of-print and no longer legal tender bills and will give you the face value in return.

However, rather than exchange your non-legal tender Canadian 1000 dollar bill for the same value from the Bank of Canada, you might want to get it appraised as some collectors may want to add your banknote to their collection and pay more than the Bank of Canada for it.

Passing it on! colour changes from one series to the next & the lasting impact

Both of these statements are true, and like all banknotes, the Canadian 1000 dollar bill underwent changes during the first three official Bank of Canada banknote series.

The “Scenes of Canada” Series marked the Bank of Canada’s first endeavours in crafting a sense of national identity through banknotes. A portrait of Queen Elizabeth II replaced Laurier, as were all of the banknotes in the “Canadian Landscape” series, while a landscape featuring a covered bridge on a path through the Village of L’Anse-Saint-Jean, Quebec and the Saguenay River Fjord.

After reading our Canadian banknote series, you know Canadians have found many ways to craft national identity, interpret the imagery of banknotes, and find all sorts of things to complain about. When the Bank of Canada chose “Birds of Canada” as their next subject for an official banknote series, they did so intending to create politically neutral and non-problematic banknotes.

And yet, did you know Canadians created an issue over birds on banknotes? The source of controversy for some people was the Canadian 1000 dollar bill, which would be featured in its last banknote series ever, issued in 1992.

If you have seen an actual Canadian 1000 bill, this is likely the version of the banknote you’ve seen. Queen Elizabeth II returns as the portrait of the banknote, which features a purple hue and Parliament’s Peace Tower with a Maple Leaf flying above it on the obverse.

In its last version, the Canadian 1000 bill caused controversy over the bird selected for the banknote’s reverse engraving.

The bird initially chosen for Canada’s largest but least-common banknote was the Spruce Grouse. However, the Spruce Grouse has a nickname derived from its real-world defence mechanism against predators: remaining motionlessness. The controversy was not over the metaphorical conclusions people could extract from the Spruce Grouse. Instead, it was that the bird’s nickname is “fool hen.”

The nickname “fool hen” caused enough controversy in the late 80s and early 90s that the Bank of Canada decided against using the Spruce Grouse, opting for a pair of Pine Grosbeaks. The “Birds of Canada” Canadian 1000 dollar bill is likely to be the final banknote of a $1000 denomination in Canada for the foreseeable future and potentially ever. 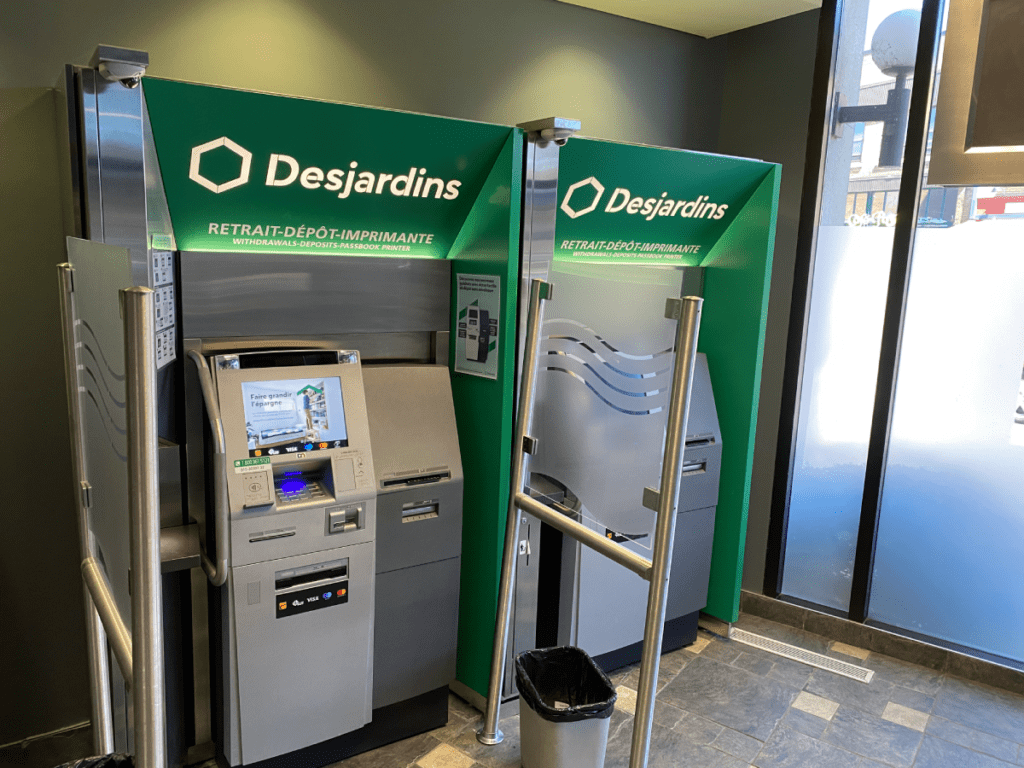 Looking for a Desjardins automated teller machine (ATM)? Desjardins is not a large Canadian bank, it’s a federation of credit unions in… The Best Chequing Accounts in Canada

Choosing a financial institution with which to open a chequing account is not the most important financial decision you’ll ever make, but…