Why Is McDonald’s Accepting Bitcoin? A Financial Revolution 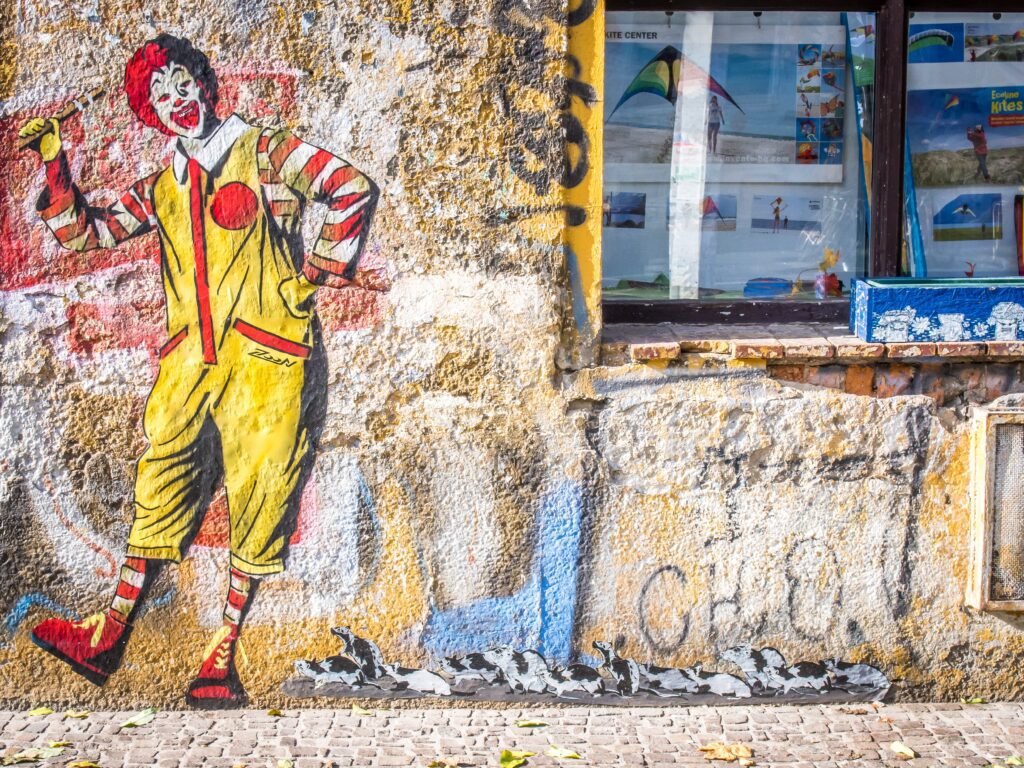 Would you like Bitcoin with that? On Tuesday, September 7th 2021, Mcdonald’s began accepting payments in Bitcoin (BTC). If this is the kind of mainstream cryptocurrency adoption you’ve been waiting for, I hate to burst your bubble but, it’s only in El Salvador. McDonald’s locations in El Salvador began accepting BTC on the same day their government officially recognized Bitcoin as legal tender. But McDonald’s aren’t the only ones hopping aboard the crypto express.  Worldwide, there are many companies now accepting Bitcoin.

Even more surprising, just a week after El Salvador legitimized cryptocurrency, several other countries plan to follow suit. Is Bitcoin finally stepping into the mainstream? Or is this a fleeting financial trend? Digital currency is a hot-button issue ripe for impassioned debate, but there is a case to be made for mass adoption. Should Bitcoin be accepted everywhere? Let’s dig in.

Bitcoin is the father of the cryptocurrency market. Creator Satoshi Nakamoto, whose true identity remains shrouded in mystery, created Bitcoin with a singular vision; give people the power to be their own bank. But why?

According to Satoshi Nakamoto, the root problem with conventional currency is all the trust that’s required to make it work. The central bank must be trusted not to debase the currency, but the history of fiat currencies is full of breaches of that trust, he explains.

Bitcoin’s value is not backed by any government or central bank, nor is the value tethered to a commodity like gold. Instead, the value is determined by the defining principles of classical economic theory; supply, demand, and the free market.

Bitcoin is decentralized because there is no third party involved in the transaction, like a government or central bank. Instead, Bitcoin operates on peer-to-peer (P2P) payment technology. You already use P2P tech with Venmo in the U.S. and Wealthsimple Cash in Canada. You can send $100 worth of Bitcoin directly to someone on the internet without involving a financial institution, and you can do it completely anonymously. All you need is a digital wallet address. Remember when ApplePay was new? That’s a digital wallet. Look at it now!

Everyone has access to the public ledger, called the blockchain, which records and stores every Bitcoin transaction ever made. Instead of names and bank account numbers, you see transactions between alphanumeric wallet addresses. Of course, the actual process is quite a bit more complicated, but you get the picture.

Who is using Bitcoin?

If you’re just hearing about the new digital money taking the world by storm, it can be hard to wrap your head around a currency with no intrinsic value. Who is using Bitcoin? And how? The answer may surprise you.

It’s not just drug dealers and anti-government libertarians taking their money underground. Your’s truly, the author of this article, is a crypto enthusiast. And major American companies like Tesla, Paypal and Square have entered the market.

Did you know there are several major banks that have invested in Bitcoin too? If there’s a chance to make money, and a lot of it, it should come as no surprise that financial institutions like Goldman Sachs, Citibank, and Morgan Stanley also have their hands in the digital honeypot.

Here in Canada, our largest online investment brokerage, Wealthsimple, was the first to offer cryptocurrency trading on a federally regulated platform. So if you continue to subscribe to the stereotype that a Bitcoin user is a specific “type” of person, one very different from yourself, you’re just wrong.

Bitcoin was created by people like us, for people like us. We were the first to start using it, and because of us, Satoshi Nakamoto’s dream of giving financial power back to the people is starting to materialize.

But there are other unlikely passengers boarding the Bitcoin train; entire governments. In the most bizarre plot twist ever, some nation-states have embraced the digital gold that was originally designed to undermine them. But not just any government, no. Third-world developing countries are adopting cryptocurrencies at breakneck speeds.

Why are third-world countries using Bitcoin?

When you hear the term “third world” you immediately think of extreme poverty. So why would anyone with so few resources turn to something as risky as cryptocurrency? Most underdeveloped countries share a few key characteristics that make cryptocurrency an attractive alternative to their own traditional money. Let’s take a look:

One of the primary contributors to poverty is that people just don’t have access to traditional financial services like bank accounts, debit cards, or loans. For a lot of people, there just isn’t the financial infrastructure to store the little money they do have in a safe place. If there is, the costs are prohibitive.

In the third world, the only thing more ubiquitous than Big Macs are smartphones and internet cafes. Countries like Nigeria, Vietnam, and the Philippines are among the highest cryptocurrency users thanks to a boom in internet and smartphone access.

Holding Bitcoin is like a makeshift bank account for people who don’t have access to a traditional one. It gives them the ability to store their wealth and transact; basic things you normally can’t do without a bank. And banks need a high degree of technology and infrastructure in order to operate securely and efficiently; something we take for granted in North America.

Countries with a high degree of economic instability or political unrest can experience rapid inflation. That’s when the price of goods and services increases so quickly and dramatically your money does not have the same purchasing power that it used to. Other factors, like political corruption and fiscal mismanagement, can cause your money to lose its value as well.

In countries experiencing a high rate of inflation, cryptocurrencies like Bitcoin are a way for people to protect the purchasing power of their money; a hedge against inflation. Bitcoin’s volatility has paled in comparison to the hyperinflation Venezuela has experienced since the early 1980s. From 1985 to 2018 total inflation in Venezuela hit a jaw-dropping 65,374%.

Lack of social and political trust

Many third-world countries also struggle with a high degree of social, economic and political inequality. Poverty, racism, and political corruption cause people to lose faith in each other and institutions. Without social trust, people fail to organize coordinated efforts for positive change nor do they fully participate in the local economy because they are afraid to financially engage with each other. And they tend to reject pro-socioeconomic policy because they do not trust their government.

Bitcoin transactions are recorded on a public ledger that everyone has access to. The blockchain stores every Bitcoin transaction ever made. And since everyone can see it, this kind of transparency can hold individuals and institutions accountable; repairing social trust to achieve socio-economic equality.

For example, individuals can use the blockchain to monitor how governments spend taxpayer money. It removes the need for a third party, like a central bank, and protects identity so people can engage more fully in their local economy.

The problem with Bitcoin

Of course, there are obvious drawbacks at play here. While cryptocurrencies create more financial inclusions for those previously on the fringes, it’s not a perfect solution. Those in abject poverty still lack access to the two basic things you need to use digital currencies; the internet and a device like a computer or a smartphone.

Digital currencies are not backed by a central bank or a commodity like gold. So their value fluctuates widely based on supply, demand and market sentiment (among other things). In order for a cryptocurrency like Bitcoin to function as money, its value needs to remain relatively stable. Unpredictable price changes also prevent cryptocurrency from acting as a unit of account; making it impossible to determine the true value of a good or service.

Because cryptocurrencies like Bitcoin are not widely accepted, you need to cash out your crypto into traditional money,  called fiat,  if you want to purchase real-world goods and services; but you need to have a bank account in order to do that. Without mass adoption, cryptocurrencies fail to provide the kind of financial inclusion necessary to escape poverty.

Before Bitcoin can go mainstream it needs to overcome a few deficiencies first; namely, its price volatility. In order for something like a cryptocurrency to function as money, it needs to be a store of value,  a unit of account, and be accepted as a bonafide medium of exchange between the transacting parties.

Should Bitcoin be mainstream?

Personally, I believe the answer is yes. But I do not believe Bitcoin, or other cryptocurrencies, will be a perfect substitute for government-issued money anytime soon. Some of Bitcoin’s drawbacks are directly related to its unpopularity. As long as fear, uncertainty and doubt persist among policymakers, Bitcoin will have a hard time achieving mass adoption. And without mass adoption, Bitcoin can’t fulfill the most important role of money; an accepted medium of exchange.

Yet, as more countries move towards legitimizing Bitcoin, people feel safer using it. The next hurdle to overcome is price volatility so that it can function as a store of value and unit of account. In order to achieve stability, there needs to be a degree of centralization and regulatory framework. But too much oversight and you defeat the purpose of a decentralized, peer-to-peer currency. Not enough oversight and the benefits of Bitcoin can never be fully realized.

Currently, cryptocurrencies are already playing a critical role in third-world countries. In developed nations like Canada, Bitcoin has struggled to gain traction. Mostly because the overall integrity of our political and financial institutions makes the original use-case of cryptocurrencies like Bitcoin kind of unnecessary.

But as a banking industry insider, I believe our financial system is long overdue for disruption. Traditional banks are slow, expensive and inflexible. The cost of that inefficiency is routinely passed on to customers. Bitcoin, while not a perfect substitute for the dollar, offers a modern-day solution for a modern-day problem. If you’re looking for fast, efficient, low-cost transactions with built-in accountability, Bitcoin is the answer.

Yet, despite Bitcoin’s obvious challenges, there is a case to be made for widespread acceptance. As countries like El Salvador and companies like McDonald’s become more crypto-friendly, the benefits of such a revolutionary technology become palpable. In El Salvador, you do not need a bank account or physical cash in order to buy yourself a hot meal. And to borrow from McDonald’s, I’m lovin’ it. What you need to know about NFTs in Canada

Non-fungible tokens (NFT) are crypto investments bought on the blockchain. They are mentioned more in mainstream media because of the high prices… Sponsored by CoinSmart You can buy DOT with CoinSmart. But what is DOT? Polkadot is one of the most promising projects in… The 10 Best Crypto Wallets for Canadians in 2021

So you’ve been hearing about crypto wallets lately, and you’ve decided that it’s time to get one. Yet you’re guessing where to…